A Home Away From Home

Almost 70 years after being forced out of their homes, the residents of Al-Am’ari camp, situated on the southern outskirts of the West Bank city of Ramallah, still regard themselves as refugees. Inhabited by over 10,000 people, lives begin and end within the camp’s single square kilometre confines, yet the majority of its residents still identify themselves with a land that has long since become unrecognisable to them under Israeli occupation. With 40% of its population under the age of 14, a staggering majority of its citizens have never even seen the land which they proclaim to be their home, yet a quiet and stubborn determination to one day return to their homeland pervades the camp despite the unspoken reality of the situation. This firm resolution to leave the camp has not however caused the community to stagnate as they await their return. On the contrary, Al-am’ari boasts the qualities that can be expected from any town in the region. Cafes, shops and restaurants line a central highstreet; hospitals and schools provide the residents with a high-quality service; the sporting prowess of the fencing and football teams have even placed the camp on an international stage.

This series of images pays testimony to the bitter-sweet resilience of the camp’s inhabitance shown through the apparent normality of their existence despite their long-term displacement. 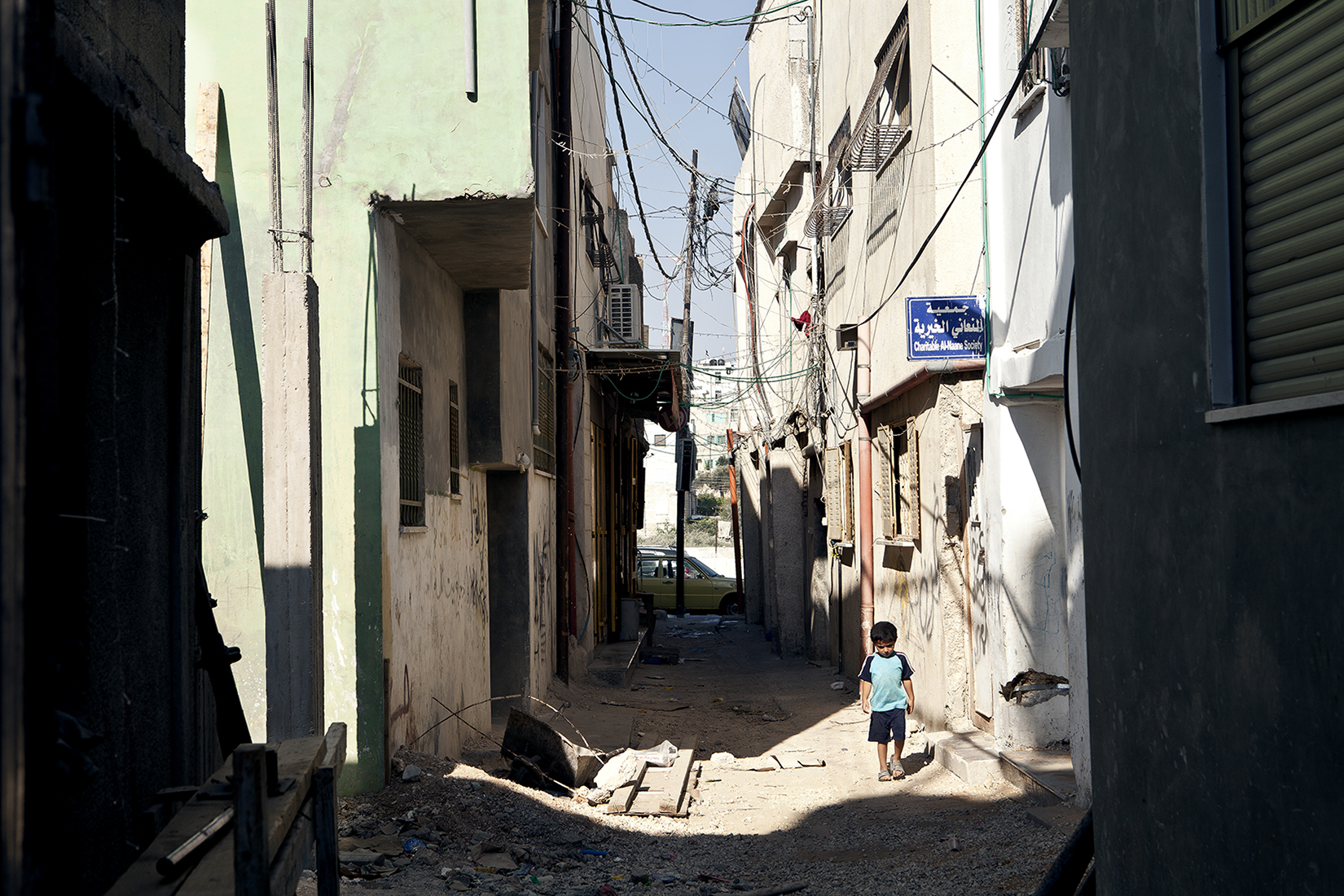 A boy walks down a side street on the outskirts of the camp. The high population density has resulted in buildings being tightly packed together, leaving some streets only half a metre wide. 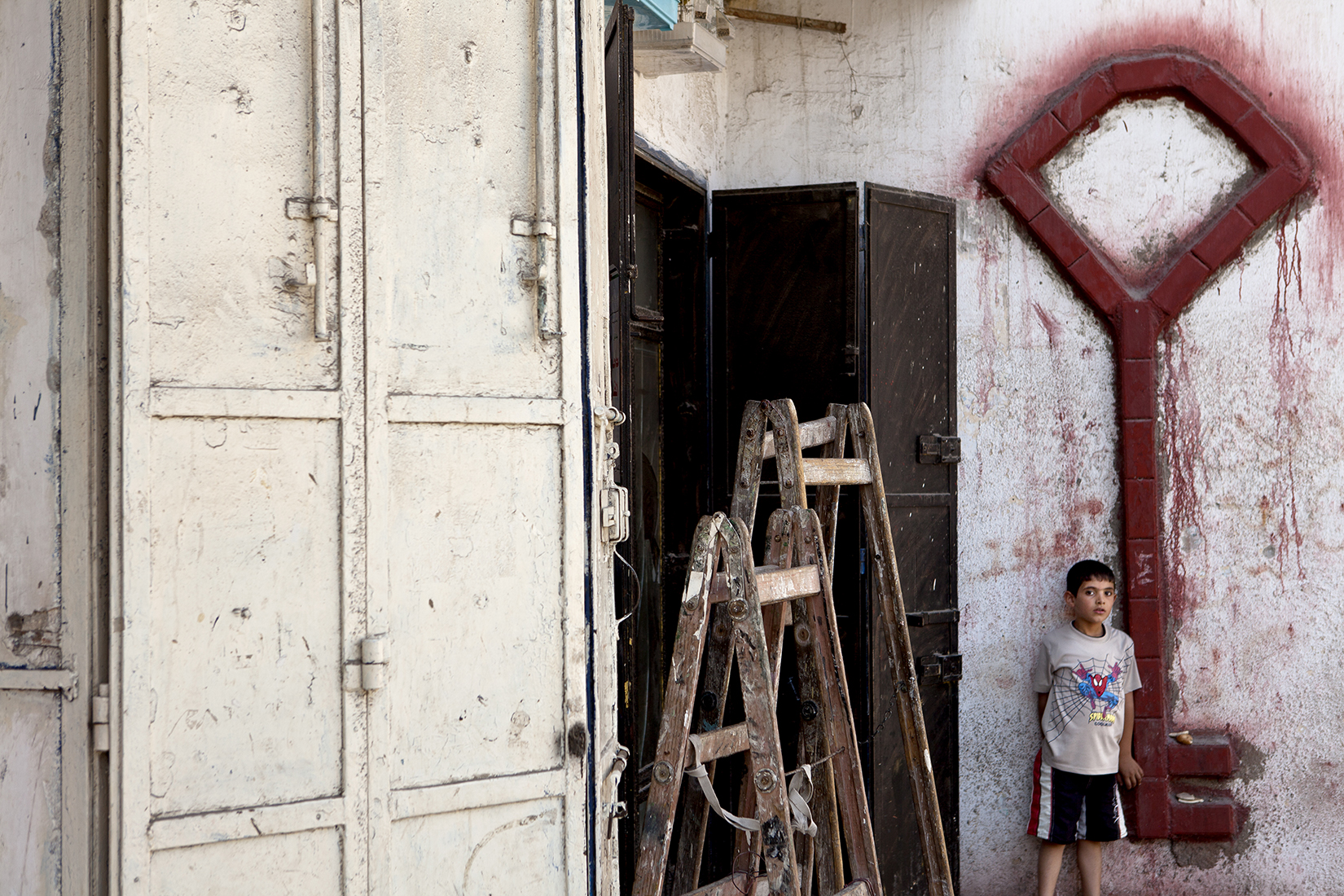 A boy stands close to an image of the Key of Return, a symbol found across the camp signifying the people’s resolution to one day go home. When the Palestinians were first forced from their homes they were reassured that they would return within a few days, and so left all their belongings behind, choosing instead to simply lock the front-door and bring the keys with them. Many families still have their house key. 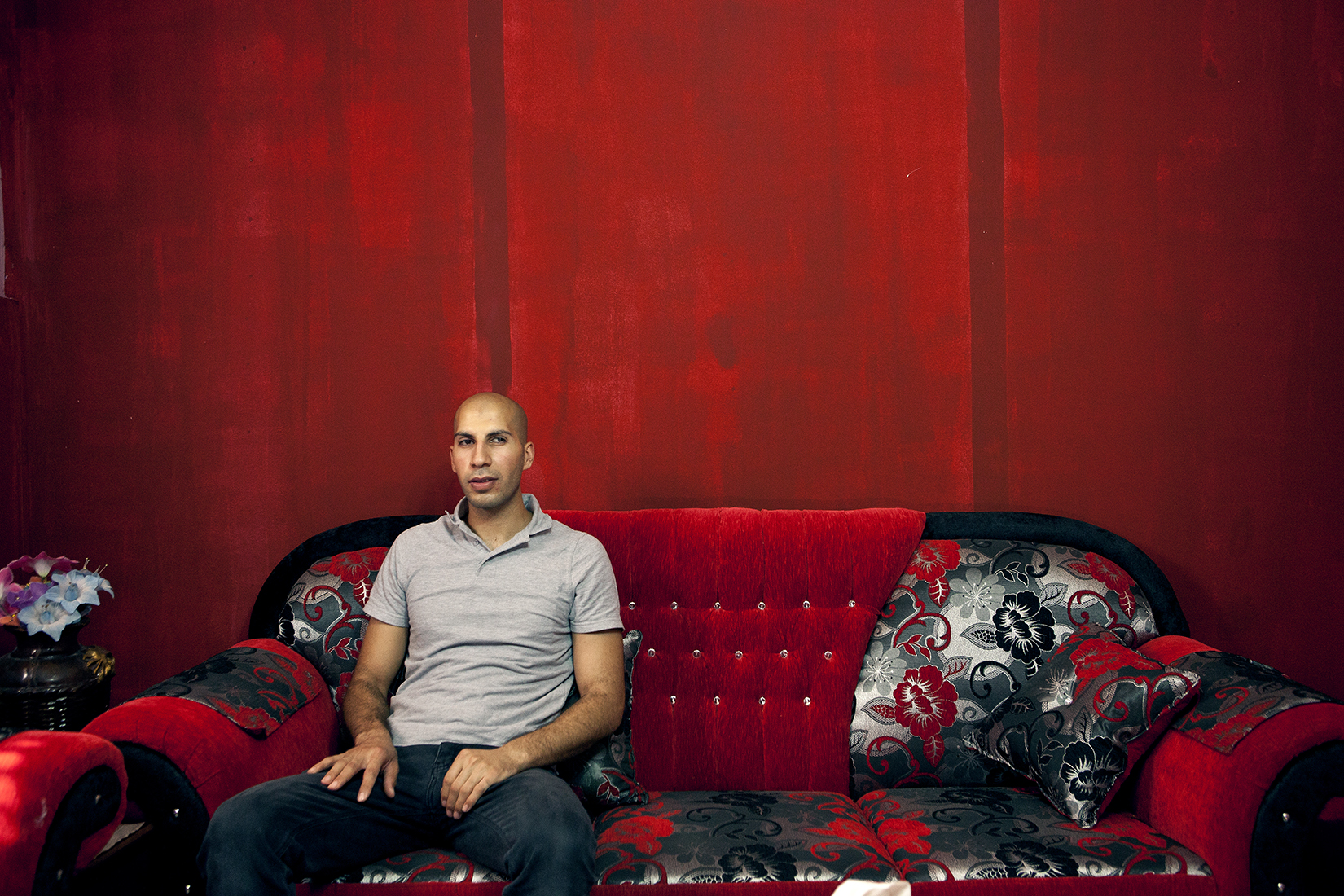 Mohammed, a recent graduate of a University in Malaysia sits in his living room. Though well-educated and fluent in English he is finding it hard to find work and so helps out in a local takeaway selling falafel. 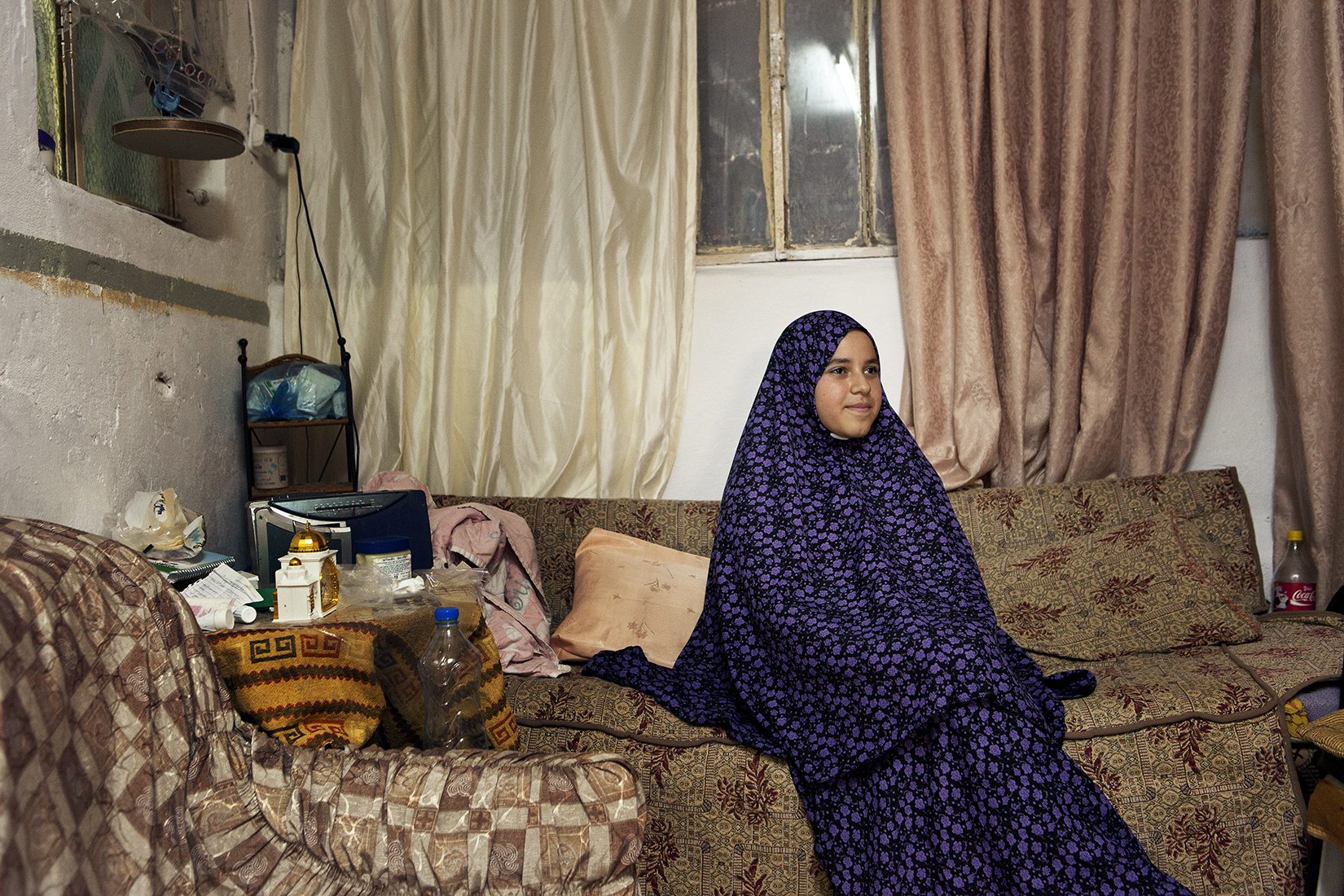 A girl sits in her living room. Though not all women are now necessarily expected to wear burqas, most men still prefer that their wives wear them, saying that “the beauty of a woman should be reserved for her husband alone.” 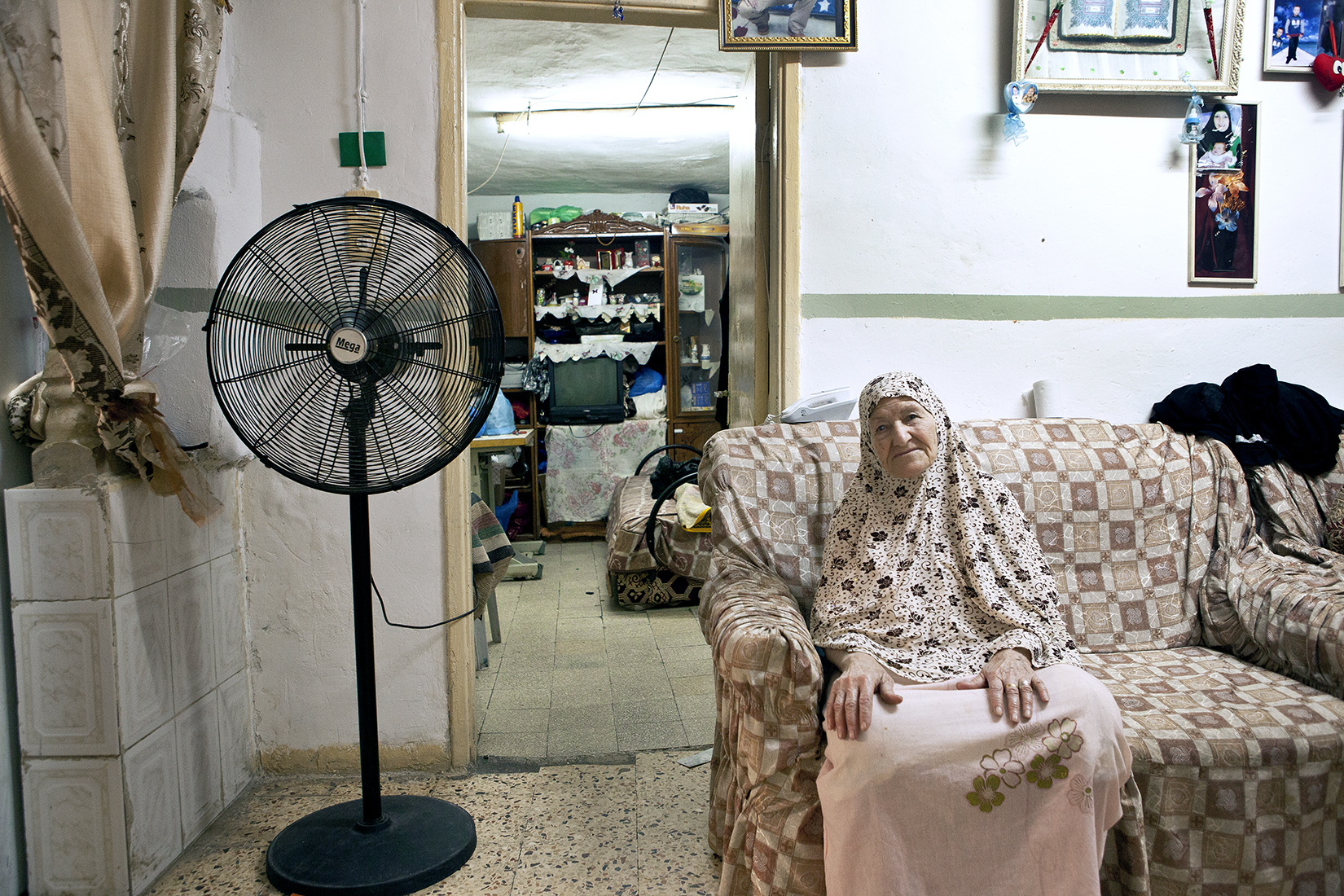 An old-woman spends the day inside due to the heat. Though the majority of the camp speak little or no English, the community takes a huge interest in the presence of a westerner, making every effort to offer assistance and hospitality. 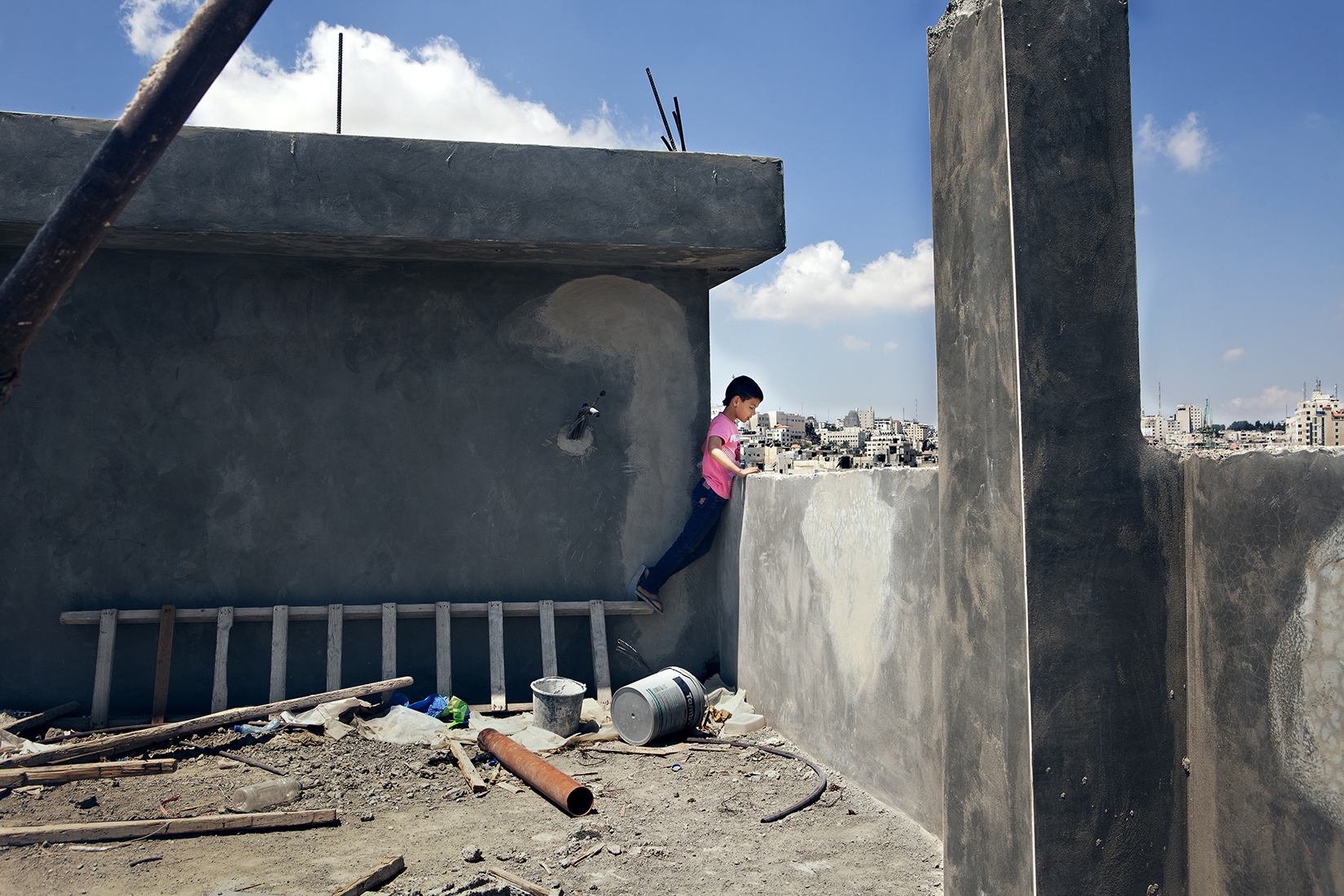 A boy peers over the top of an uninhabited five story building in the centre of the camp. Shortly after the photo was taken he picks up a piece of concrete rubble and throws it at one of his friends below for fun. The throwing of stones in clashes between the local community and the IDF has caused the children to follow suit, spurring a new generation of aggressors against their Israeli neighbours. 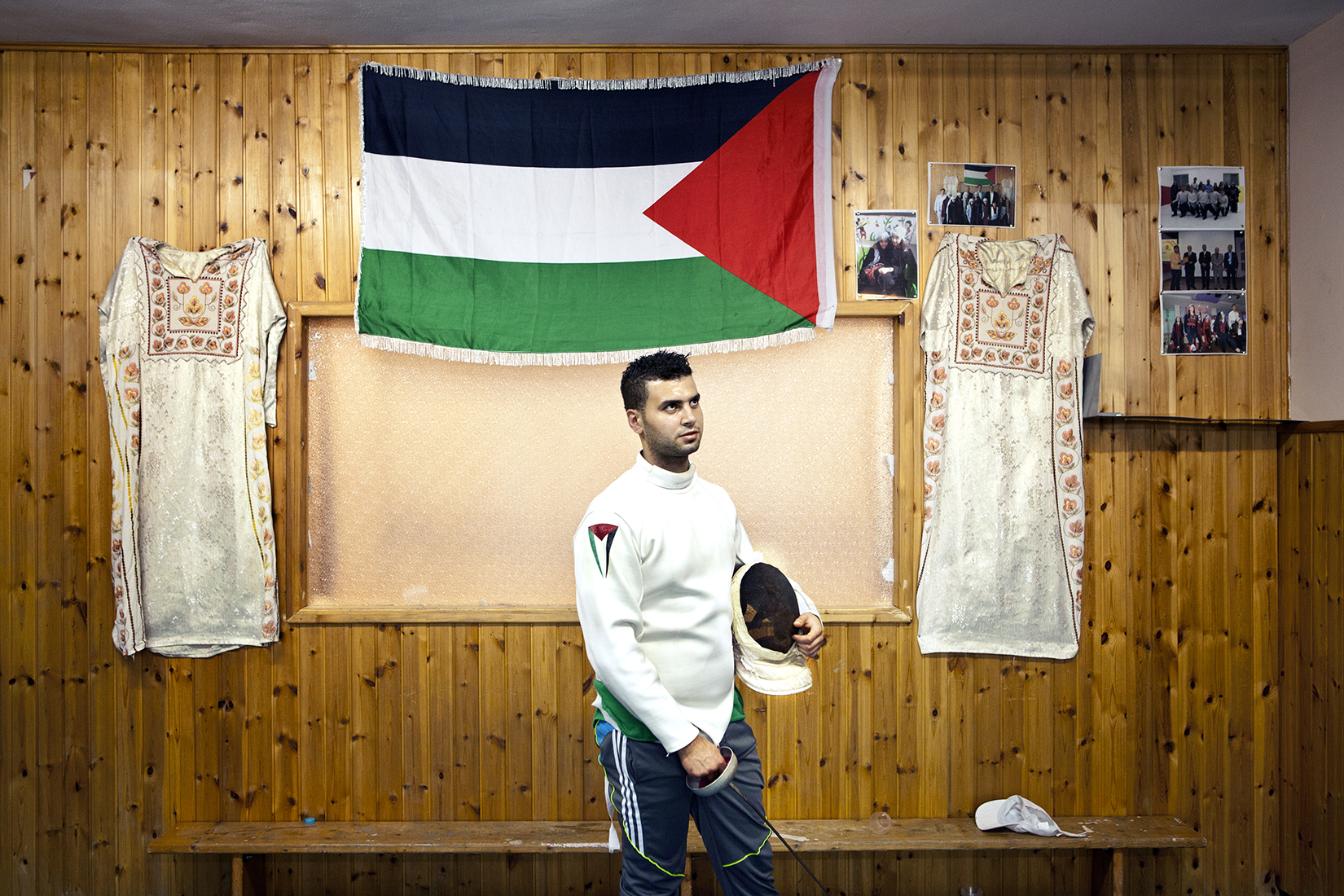 A member of the camp’s fencing team. The team has been well-established for a number of years, partaking in international tournaments and receiving coaching from one of the sport’s best players. 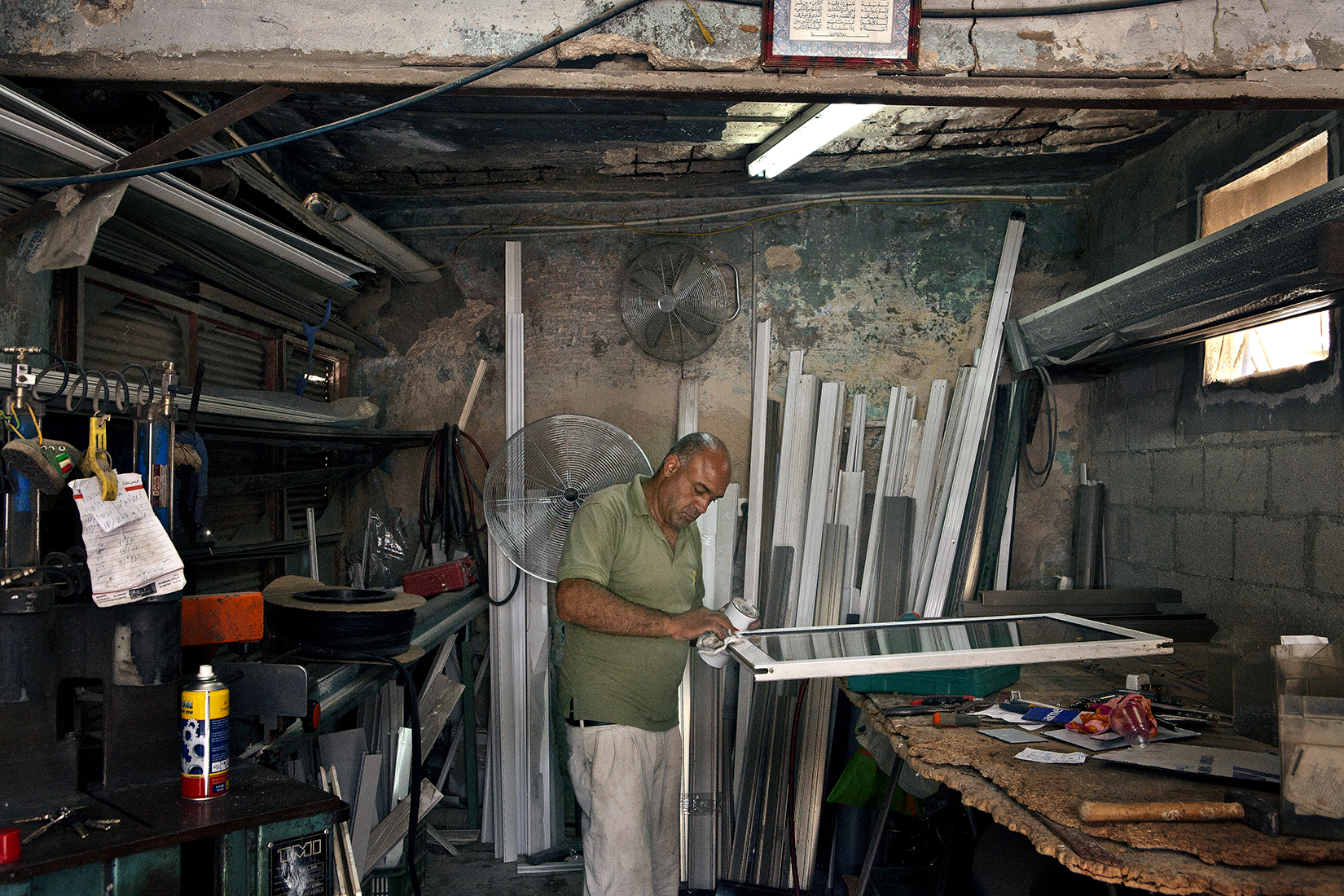 A resident polishes the frame of a window that he has just finished building in his workshop. Despite living in a refugee camp, residents have the opportunity to create and sustain a decent career. 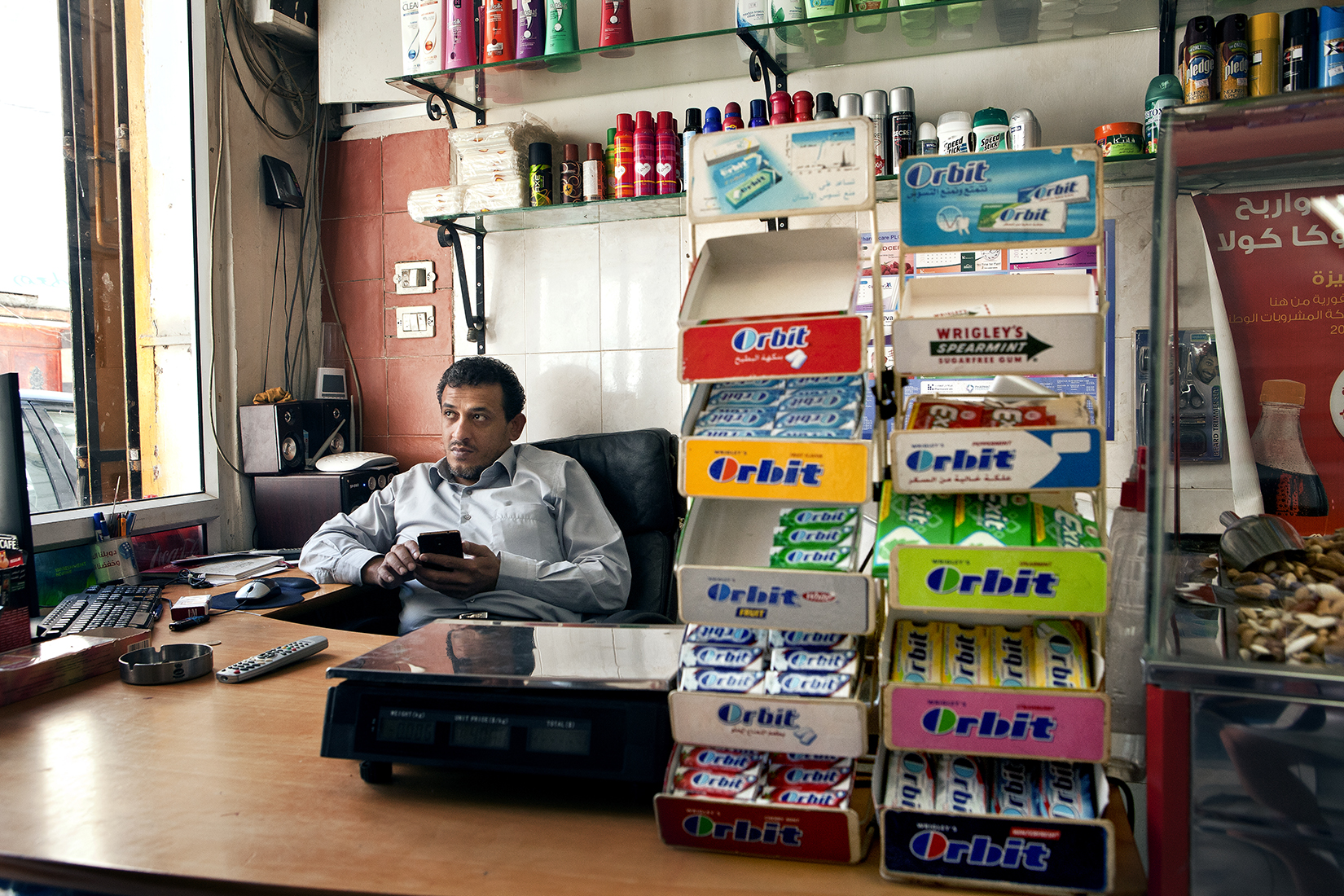 Mohammed sits in his shop on the camp’s highstreet with a newly purchased smartphone. As well as running his shop he has another job so that he and his family can live in comfort. 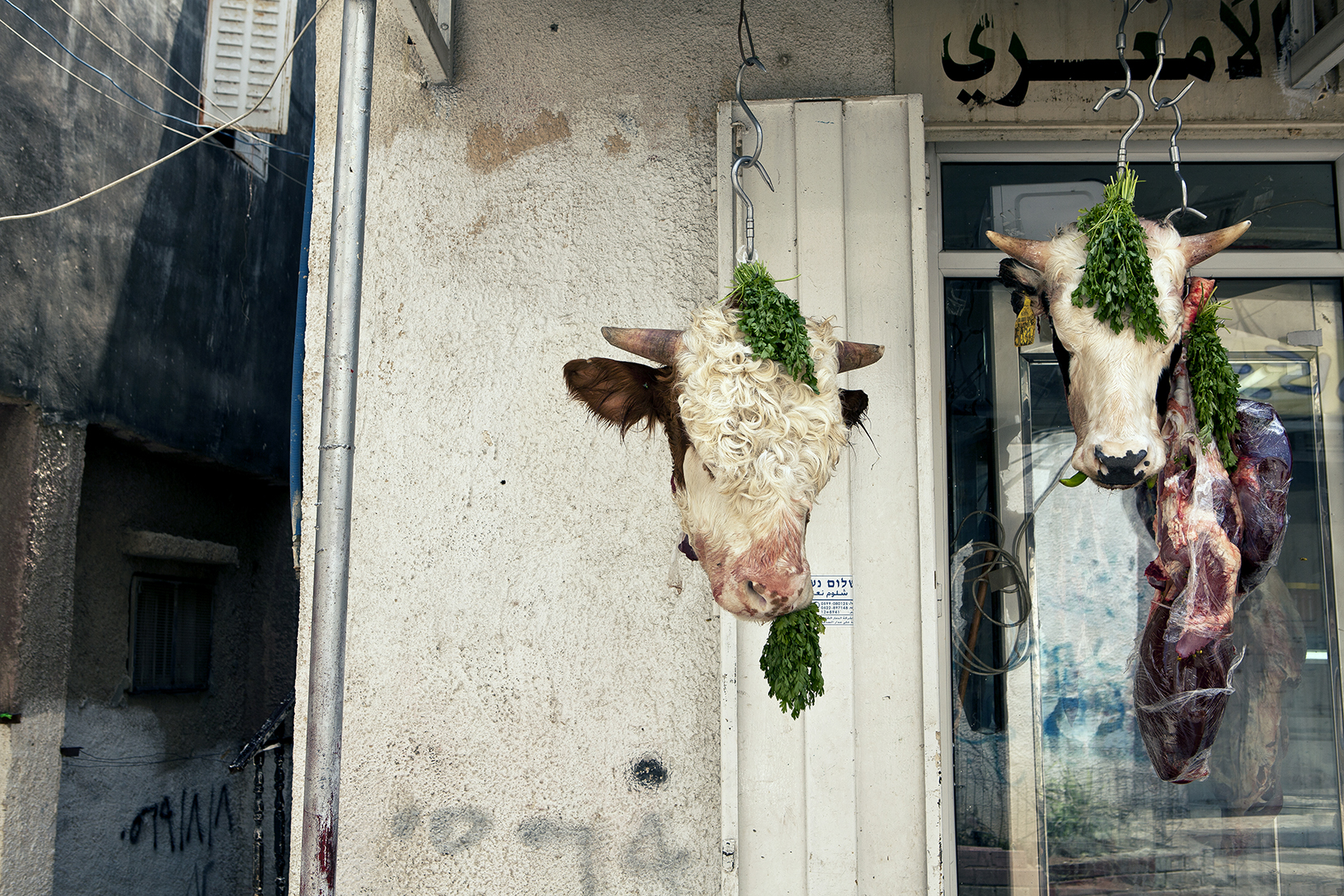 Two cows heads and their various organs are hung outside of a butchers on the camp’s highstreet. They are hung out to attract wasps so as to keep them from coming into the shop. 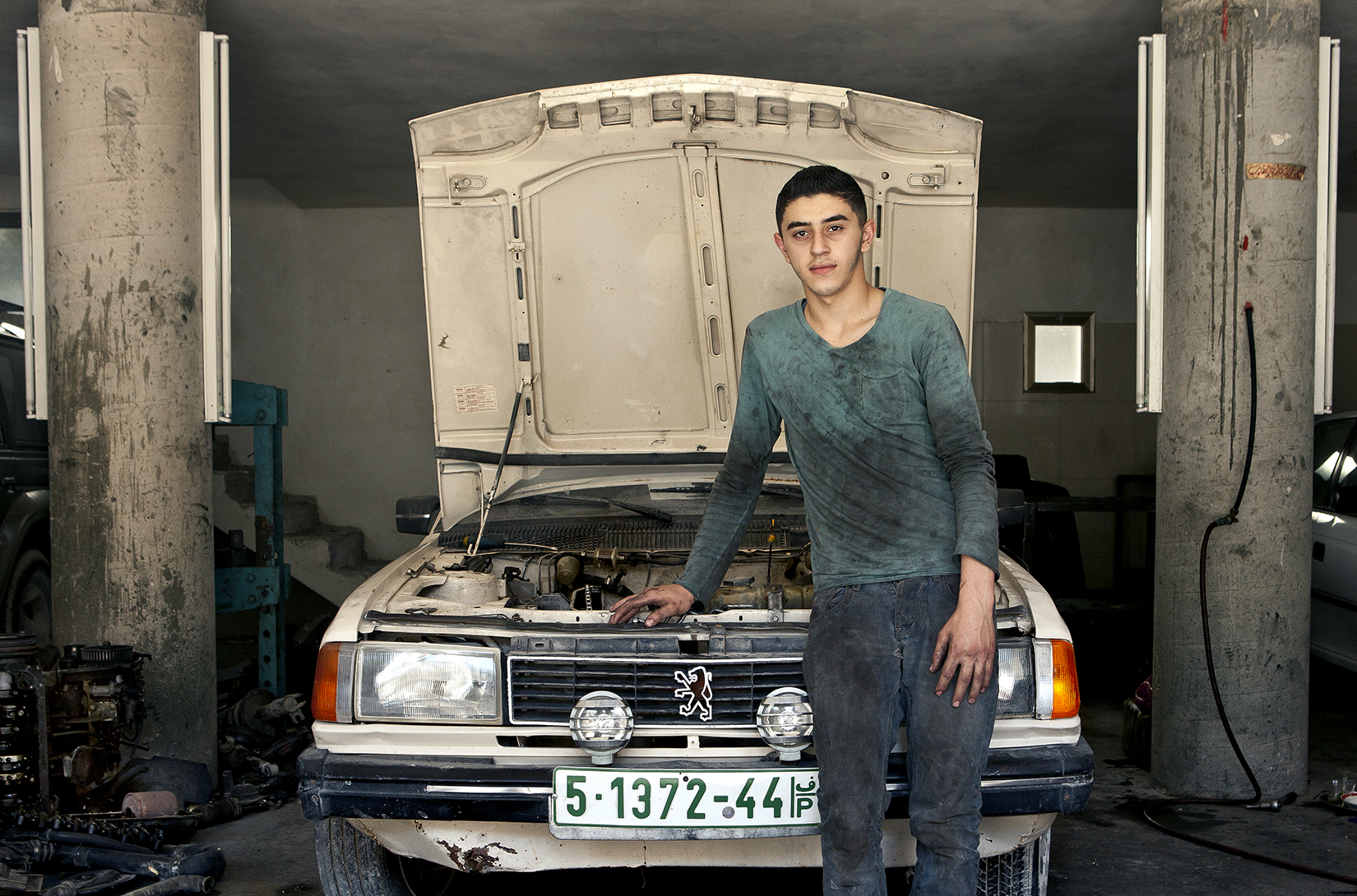 A young man poses in front of an old Vauxhall that he is mending. There are several car mechanics within the camp. Signs on the Israeli side of the boarder forbid Israeli motorists from coming into Palestine to use the mechanics for their services despite their comparatively cheap fees for fear that the cars might be maliciously tampered with. 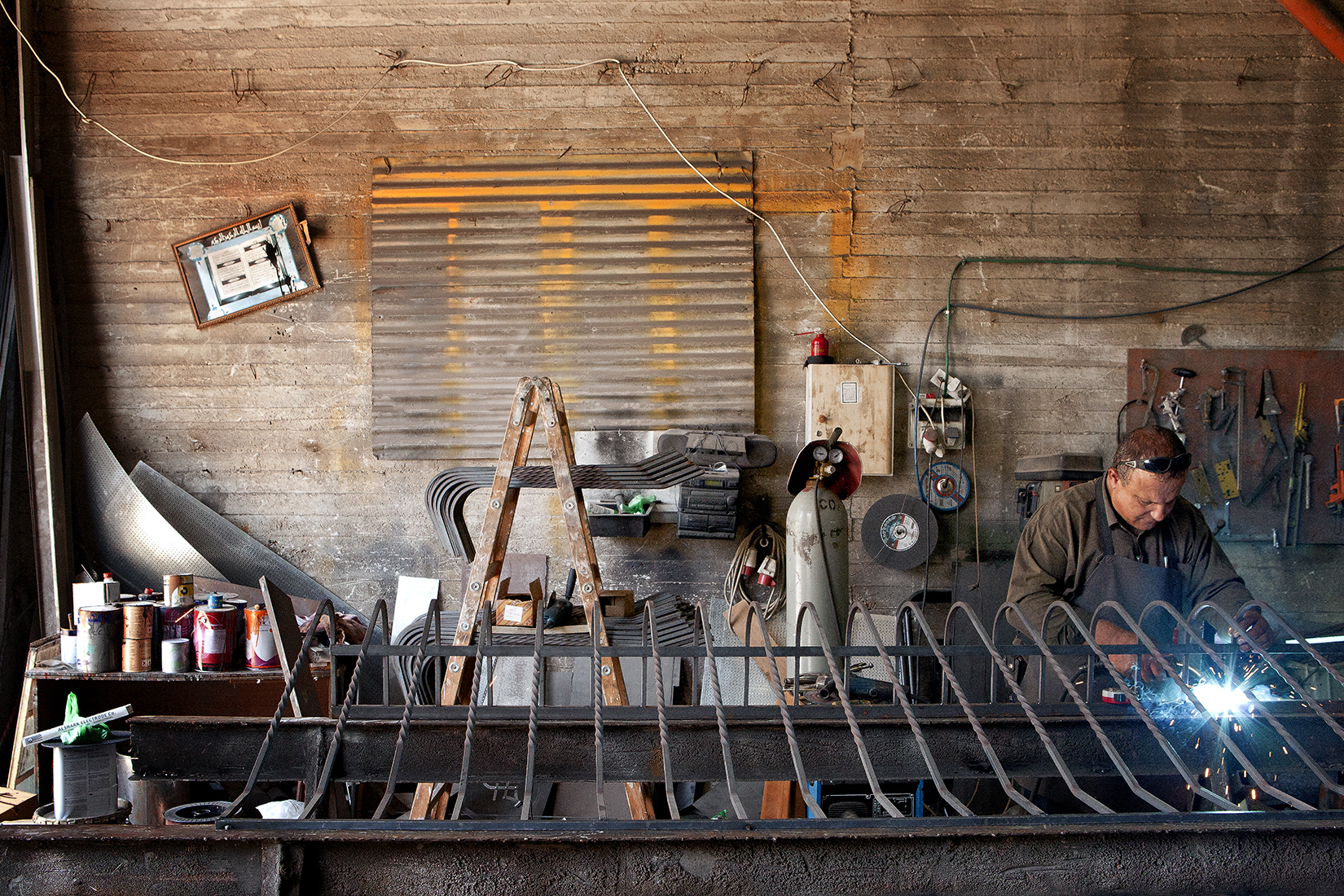 An iron worker is welding together the parts of an iron fence that he is making. The range of tools and equipment in his workshop shows that businesses have the opportunity to be very successful despite the fact that they are based within a refugee camp. 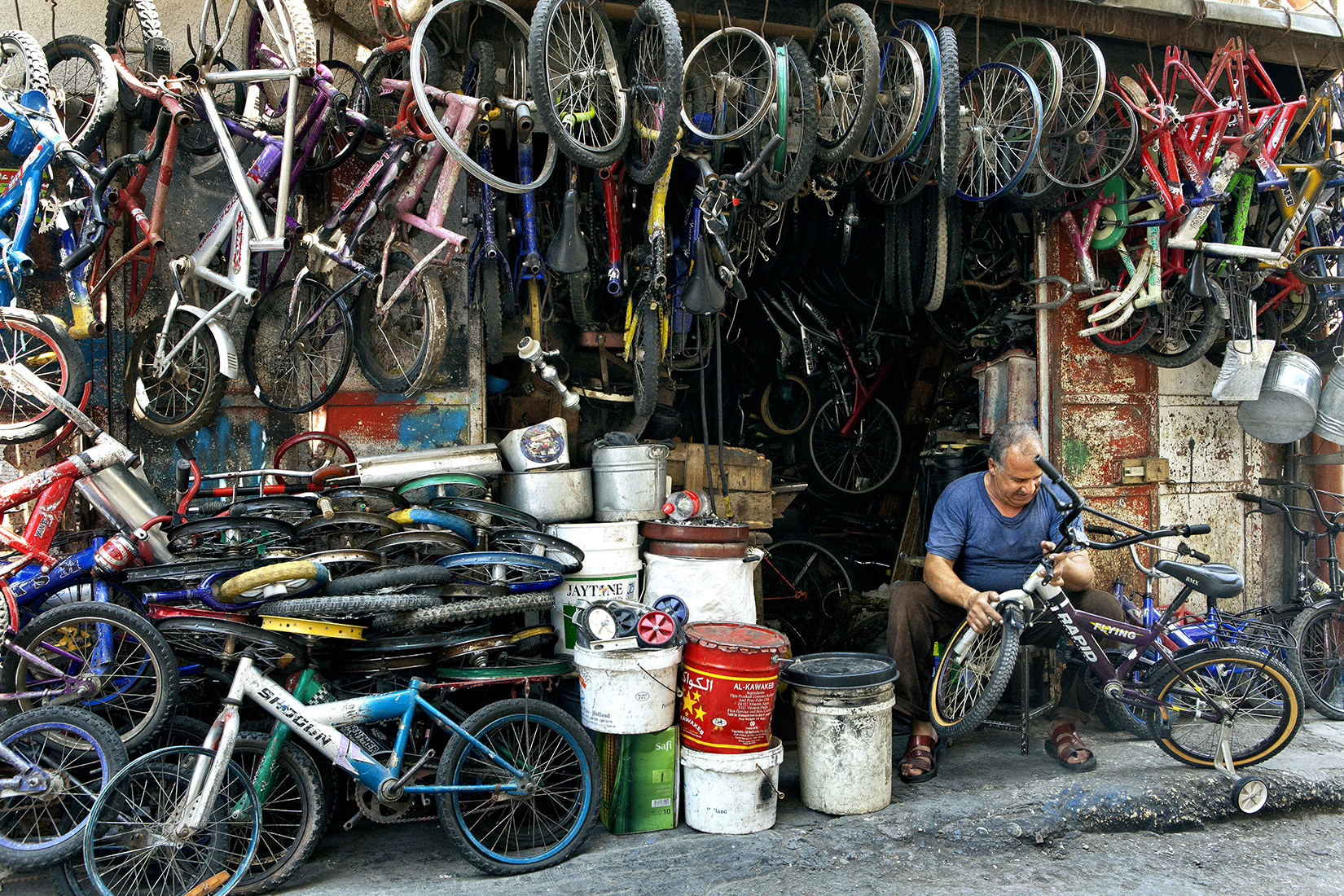 A man repairs a bicycle for one of the local kids. The huge population of children in the camp means that two such repair shops can exist next to one another without either ever seeming to be out of work.